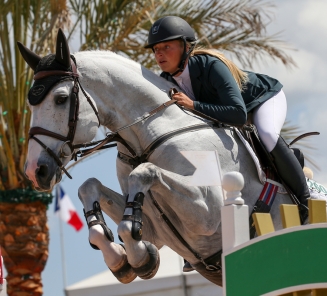 In Ottowa, Canada, several BWP-horses participated in the CSI5* competition.

On Thursday it was for example Newton van het Krekelhof and his rider Catherine Tyree. On a height of 1m40 they took the bronze medal! Newton is a descendant of Diamant de Semilly x PKZ Contact van de Heffinck. Daniel Reygaerts is the breeder.

In the same class the 5th place also went to a BWP: Nanini van d'Abelendreef. This descendant of Kannan x Heartbreaker was ridden by Erynn Ballard. Nanini was born in the stables of Wilfried Cerpentier.

On Friday the bronze in the 1m45 against the clock went to the rider Susan Horn. She saddled Kirlo van den Bosrand, a gelding out of the combination VDL Cardento x Utrillo. Breeder is Luc Huyghe.

The highlight of the weekend, however, was reserved for BWP ambassador Bull Run's Faustino de Tili. With Kristen Vanderveen this combination stayed double clear over a height of 1m50. Good for silver! Faustino was born in the stables of T & J Bvba. He is a son of Berlin x Darco.

Faustino is not the only BWP stallion who won a prize in Canada. In Vancouver-Langley the bronze was for BWP elite stallion Kadans van de Mispelaere. This son of Wandor van de Mispelaere x Lux Z jumped a great and clear round under the saddle of the South Korean rider Jaehee Jeon. Breeder of Kadans is Danny Mortier.

On the 5th place in this class: Goodwill VB ridden by Katie Kruger. Goodwill (Orlando x Lys de Darmen) was born in the stables of Andre Van Buynder.

We end with a nice result of Invisible Star and her Brazilian rider Fernando Chiarotto Penteado. This combination was good for bronze in São Paulo (Brazil). The BWP mare is a descendant of Winningmood vd Arenberg x Skippy II, breeder is Walter Lelie.